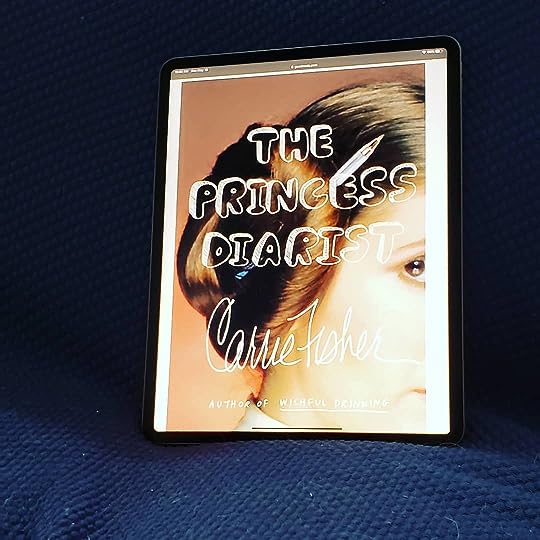 Do not let what you think they think of you make you stop and question everything you are.

Carrie Fisher has found the notebooks – the diaries she kept when she played Princess Leia during the first Star Wars – and has decided to write a book about it.

It’s not nice being inside my head. It’s a nice place to visit but I don’t want to live in here. It’s too crowded; too many traps and pitfalls.

Told in snippets of poetry and quotes from her earlier days, we learn what it felt like to portray one of the most iconic characters from this everlasting series.

And we get an in depth look like never before on Fisher’s opinions on love, lust and everything in between.

Someone has to stand still for you to love them. My choices are always on the run.

Don’t hate me, but I’m not the biggest Star Wars fan.

I have a vague memory of watching the six original movies when I was younger and I quite liked the Mandalorian when it came out…but as far as being a clear and sustained fan? Not so much.

In all honesty, it feels a bit exhausting to jump in now – so many movies, spin offs, books, etc. I just don’t have the will.

But, this book was available at the library and I thought, hey, why not?

And it ended up being a rather good read!

The book goes back and forth a bit between the 2016-Carrie Fisher and the 1976 version.

The older-Carrie writes like you’re an old friend, ready to catch up on all the latest gossip.

She has a way to make you feel welcomed into her world and listening to the audiobook completely enhanced this feeling.

I really enjoyed getting her take on life and it truly was a wonderful read when we had her perspective.

The young-Carrie felt a bit…weird though. I think it’s cause we were literally reading from her diaries and it felt intrusive – even with older-Carrie reading it via audiobook.

It also creeped me out a bit when I read about her 19-year-old self and the relationship with Harrison Ford (who was married at the time and waay older than her).

I suppose, legally, she’s an adult and was independent…but still…it had this ick factor to it. It had connotations of her being taken advantage of…and I had a hard time shaking myself from that feeling.

All in all, this was a good book. I don’t think I’ll be going back to it but it has intrigued me enough to want to read more written by Carrie Fisher.

Interested in this one from Carrie Fisher? Buy it here:  Amazon