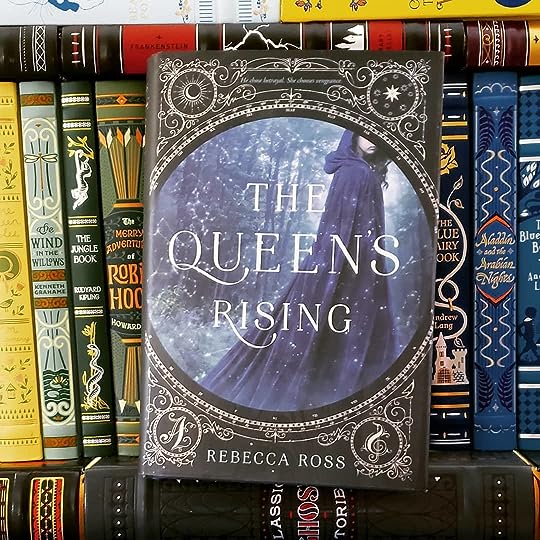 “There’s a man on Maevana’s throne where there should be a queen.”

I’m not a DNF-er, but by-gosh…sometimes I wish I was.

It literally took me over a year to read this book.

And it’s honestly been so long since I have read the beginning that most of the book has faded from my memory (which is honestly…quite unusual) and I just feel a vague sense of disinterest when it comes to this one.

From what I remember, Brienna needs to go to passion school (not THAT kind of passion, but if it was…at least the book would be interesting).

She’s to master one of the five passions – art, dramatics, music, wit and/or knowledge – but quickly finds out that she’s not talented, witty or particularly smart.

Eventually she settles on knowledge, despite not having an aptitude for it.

(Also, side note, I can see why they’d want to train the ladies in the other four traits but knowledge? It was like straight memorizing facts…why not just buy a few books and call it good?)

She gets paired up with Hotty McHotness for her tutor and immediately, you KNOW what kind of relationship they will have.

He was my master, and I was his arden, and until I passioned there was to be nothing more between us.

(Also, is it just me or is the use of “passion” in this book really awkward? Everyone is passioning left and right but as much as it sounds dirty, it’s supposed to be pure and innocent).

Anyway, she eventually gets picked up by a patron.

“This is my daughter, Amadine Jourdain, adopted through passion,”

Which, is also weird, not only cause of the phrasing but also adoption?

At first I thought it was a business arrangement, like they’re patrons and they want the arts but….then the patrons keep calling her their daughter. It’s weird. Cause she’s an adult now…not a penniless 12-year-old orphan.

Anyway, now that she has a new family, thanks to their mutual love of her passion…she gets embroiled in a plot to take the crown because of YA reasons.

Plus, in this world queens are superior, so we get a lot of clunky phrases like this:

“Wipe that off your face,” his older brother sneered. “Come fight me as a queen would.”

thrown in as the world building.

All in all, I’m glad I can finally mark this one as read but by-gosh I wish I never read it.

It just felt so drab and boring.

I didn’t care about any of the relationships.

The plot felt tired and recycled. I just couldn’t stand it.

I am willing to admit that maybe if I didn’t take a 12 month break in the middle of the book that MAYBE I would’ve enjoyed it a bit more…but I also want to point out that it takes an especially bad book to make me want to take a year-long break.

Interested in this one from Rebecca Ross? Buy it here:  Amazon