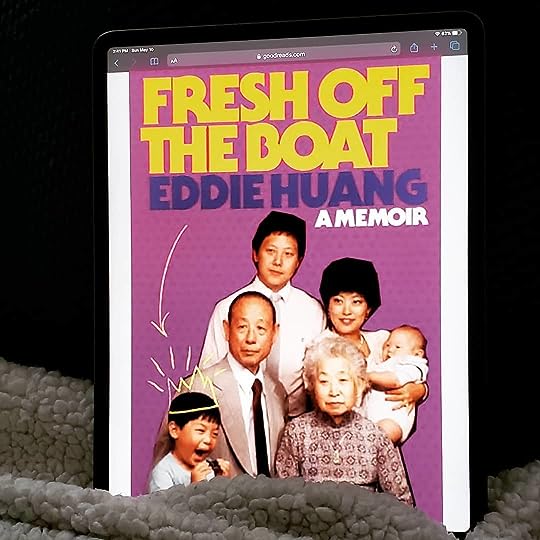 Big hair, big tits, big trouble, but the one you come home to is…not screaming for attention because she knows she’s good enough…

Can you feel me physically cringing away from this book?

I remember all of the commercials for Fresh Off the Boat and wow – it looked good. Wholesome, funny. I never actually got around to watching it…but it’s been hanging out in the back of my mind for a while now.

So, when I saw this book, I immediately picked it up.

Annnnd…my verdict is that I haven’t even seen the TV show but it’s probably better.

I had a hard time putting my finger on it at first because…I wanted to like this book so much.

There were definitely moments of it where I was like YES. THIS. This is hilarious.

Good food makes me want to hit a punching bag like, Dat’s right motherfucker. You done did it there.

People ask me what my greatest strengths are and I say perspective.

One thing that I noticed right away is that Eddie Huang is the cool guy.

He never did one uncool thing throughout the book. He was so cool that everyone pretty much reeled back and admired his coolness from afar cause it was too much up close.

It just felt disingenuous to me – and the more I read, the more I withdrew from the book.

His jokes (if that was what they were), just didn’t land for me. I think it’s because of the spite and venom he puts into them.

He didn’t understand that I didn’t hate white people. I hated whiteness.

He felt like a very mean person, the kind of makes “jokes” cause they like taking digs at you and if you get offended, they throw up their hands and say you are too sensitive.

If you like our food, great, but don’t come tell me you’re gonna clean it up, refine it, or elevate it because it’s not necessary or possible. We don’t need fucking food missionaries to cleanse our palates.

He just seemed so furious that people exist…living their lives…and not bothering him at all…but the fact that they are there just makes him angry.

He also says this:

but spends so much of the book ragging on people who try to cook “his” food.

I really wanted to ask him – does any of this matter? The hatred that you hold in your heart? The fury that takes over your words?

What they didn’t understand is that after you have the money and degrees, you can’t buy your identity back. I wasn’t worried about degrees, but I cared about my roots.

In the grand scheme of things, if someone tries one of your recipes and then changes it a bit – it shows that they are interested and learning. Food and culture is something to be celebrated – not hoarded and penalized.

All in all, I feel like this book had a lot of potential. Either as a hard-hitting memoir or as a funny take on life…but combining the both just left me confused and made me not want to finish the book.

I just…I don’t think I’d ever want to meet him. I think I’d rather do just about anything.

Interested in this one from Eddie Huang? Buy it here:  Amazon