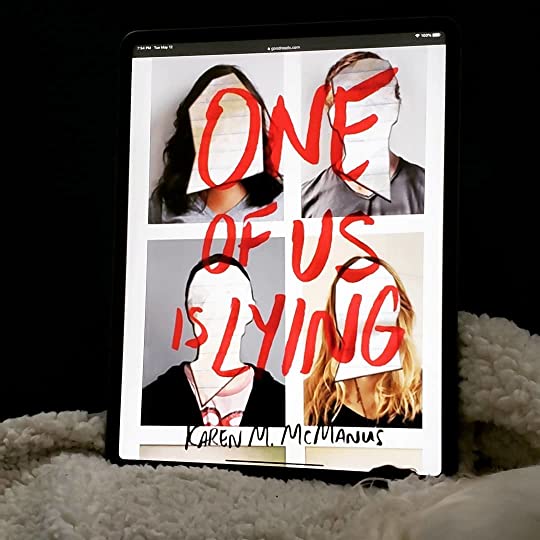 It concerns me you’re avoiding a promise not to murder me.

One Monday afternoon, five teens walk into detention. Only four walk out.

You find out who your real friends are when stuff like this happens. Turns out I didn’t have any…

Simon, the school outcast, dies from a peanut reaction and considering the method he ingested the peanuts…the eyes of the world turn on the other four.

Unless one of us is lying. Which is always a possibility.

So, who did it? Can you figure it out before the end?

Things’ll get worse before they get better.

Soooo… I didn’t figure it out, which was great BUT keep in mind I’m notoriously bad at picking apart mysteries.

When I read the HP books for the first time, I went into each one fully expecting Harry to die by the end of it (Mind you, this was when I was 12…but still, the series was CALLED Harry Potter and the ______, and I was on book 2).

The characters in this book were really well-done – each one was completely distinct and truly memorable.

Every time I got to know one of them I started crossing my fingers that they weren’t the murderer. And as their secrets were revealed, I was shocked time and time again.

I don’t read too many contemporaries but gosh-dang was I glued to this plot – the way the clues were revealed slowly and steadily. It was thrilling.

While I had no idea who did what the entire book, that didn’t ruin my enjoyment. I just sat back and went along for the ride and what a wild ride it was.

Interested in this one from Karen McManus? Buy it here:  Amazon