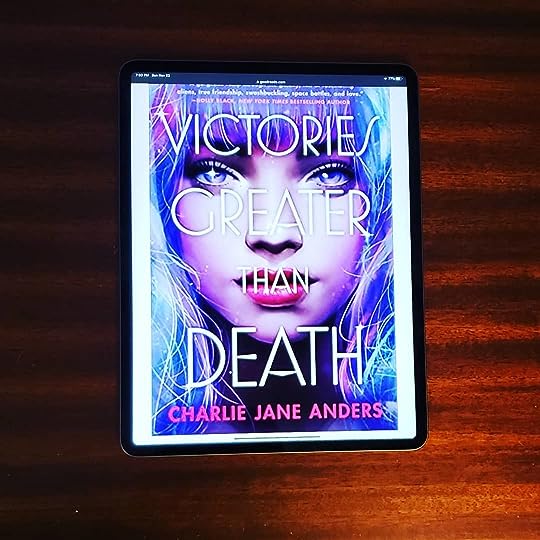 Tina has spent her entire life knowing that she would leave this earth – permanently. Because she’s secretly an alien.

She’s technically a clone of a brilliant alien commander who passed away unexpectedly.

Tina longs for her new life to begin and when her internal beacon lights up – she’s ready.

She’s transported to the wild world of aliens, spaceships and intergalactic wars – but what can one teenage semi-human do against all that?

(Apparently – when you download your previous self’s memories…a lot).

Essentially she assembles a crew of brilliant human minds from teenagers who wouldn’t be missed (the lonely, the beaten, the forgotten) and together they seek to outsmart and outdo the hoard of alien warships.

To put it frank – this book felt a bit messy.

I think it’s mostly cause the cast of characters was SO bloated. Honestly, I was grateful when someone died purely because there was one less name to remember.

I think if the characters had less shallow of personalities? Or if there were less of them in general? I might have been able to hold them in my head better.

But as of now, all of the characters were the equivalent of names-on-the-page rather than individuals.

Also, I was frustrated by the way the book dealt with real, serious issues. Essentially, they were brought up (like abuse or neglect) and then minorly dealt with before the main character moved on (think bandage over a gaping wound).

Also, I felt like the main character was given so many “Mary Sue” qualities that I had a hard time warming to her – she literally just downloads memories from her former-self and then spends the whole book going, “ahh yes. a Goobleflorf. Such a rare species of Kandkand. Truly an expert in Flying Peanutfific Aerial Combat.”

I’m so disappointed cause I was SOO looking forward to this one too. I loved the concept and that cover is divine. But the actual book didn’t pan out at all.

I received a free copy from Netgalley in exchange for an honest review.