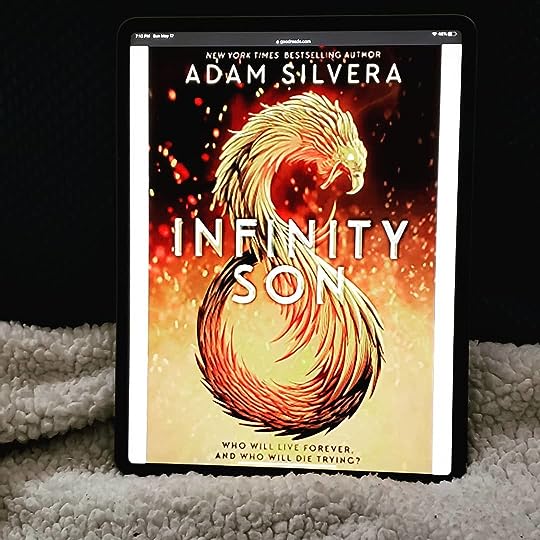 50 pgs: Let me get my rainbow flag and shout it from the rooftops.

100 pgs: I don’t know why everyone is hating on this glorious superhero book.

Twins Emil and Brighton did everything together but now that they’re approaching the end of senior year, all Brighton can think about is growing his YouTube channel and going to college.

Brighton chases after the super powered humans and creates viral videos. He hopes those will get him noticed and catapult him into fame and fortune.

I may not be throwing fire, but I’m just as much a hero as anyone else.

And just when his latest video kind of flops, he discovers that his very own brother, Emil, is among the superhumans.

Now, things are getting interesting.

But Emil has no interest in being a chosen one.

I can’t know who I want to be when I’m still struggling with who I am.

Well, Brighton can fix that. Hopefully in time to prevent the end of the world.

Despite Goodreads telling me the opposite – I still had high hopes for this book and picked it up from the library (thank goodness I didn’t buy it).

And it started really, really well.

Within the first few pages, we are thrown into an interesting world of celestials (people who get powers from the stars), phoenixes (that need to be protected) and Spell Walkers (who are normals who obtain powers by consuming phoenixes and other magical items).

The lore was unique and I was super excited to watch it develop.

I absolutely loved that Emil was gay in this book but being gay had wasn’t part of the story. It was a complete nonissue.

Which is fabulous and we honestly NEED more books where being gay is about as interesting as being straight to the other main characters.

But, as the book wore on (and yes, it truly wore on) it became apparent that…it wasn’t well thought out.

It had all of the elements of a good superhero story, they just weren’t put together decently.

It felt like a cliche of a comic book (right down to being switched at birth chosen one) – which, come on. Really now?

The world building and magic system (or whatever they bothered called it in this book – how hard is it to just call it magic?) became a huge mess by the end of the book.

It was just so convoluted and there was a convenient exception for every plot point.

But I think what was the worst bit was that…I really can’t remember any of this book. Other than the vague plot points that you find on the back of the book.

The characters didn’t feel distinct, I still can’t tell you who did what and which ones died cause they all blended together so horribly well.

The only character that really had a personality was Brighton, and the only reason I remembered him was cause he was awful.

In short, the first hundred pages or so were great – when the book was more like a contemporary romance with a slight nod towards fantasy.

But as soon as the author shifted to full fantasy the book tanked.

Interested in this one from Adam Silvera? Buy it here:  Amazon