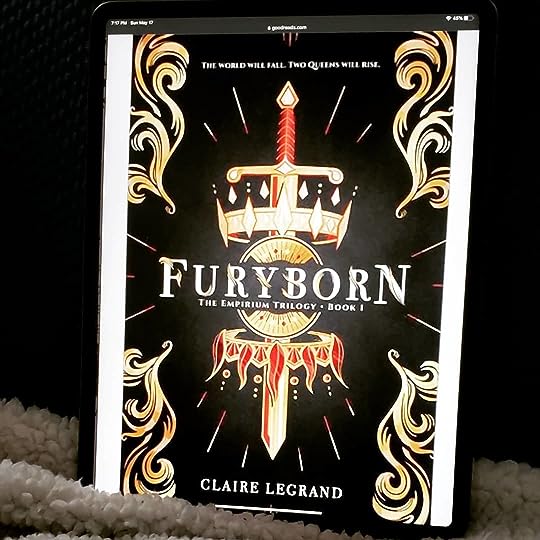 Rielle Dardenne is one of the legendary queens – either the queen of light or of blood. Either a queen of goodness, or evil.

She’s hidden it her entire life but when one of her friends become threatened, she exposes her powers in front of the king.

She was night itself reborn on earth, a queen swathed in shadows.

Meanwhile, over a thousand years later, Eliana Ferracora knew of Rielle but only as a fairytale.

Eliana is a bounty hunter but she’s truly more of a butcher, trained by her mother.

“People like us don’t fight for our own hope,” he said quietly. “We fight for everyone else’s.”

From a young age, she has been taught to suppress her emotions towards killing but once she joins a rebel captain and finds herself in a whole different situation.

I was just…kinda expecting less and more.

Just give me less:

Maybe it was because I was listening via audiobook, but I was really confused by the storylines and couldn’t figure out how to piece them together.

I had no idea that the two storylines were separated by time until about 2/3 through the book.

And even when I finally figured out they were two different timelines, I didn’t realize that it was a thousand years apart until I began writing this review.

It just felt like this book was trying to encompass so much time and space when really, it should’ve been a more focused.

This book was like fight scene after fight scene. Trial after trial. And while those were interesting, it didn’t really draw me into the plot of the book.

In the 400+ pages, I strongly feel like over half was just action scenes – which became hugely distracting.

Sure they were exciting, but often they didn’t draw me into the plot.

So, I’m all for letting your freak flab fly but I’m very particular about it for a book.

It has to make sense, with the characters and in the context of the story. Especially with a book that’s supposed to be plot driven.

But oh my gosh, the sheer number of masturbatory scenes and sex scenes – often it felt like they were just thrown in there for sheer shock value.

Just give me more:

If these characters were a color, they’d be beige. Except for the murder-y one (Eliana), she’d be a black spot in the middle of a beige wasteland.

I never connected with the characters, I just didn’t care about them and when one of them died, I was relieved that that was one less person to remember.

Kind of pairing with the less sex positivity thing, I wanted more development from the relationships in the book.

I didn’t care about any of the couples and I think it’s in part because we rushed right into the sex bits.

Without the build of the relationships, the casual and detached sex took away my enjoyment of watching the couples grow and develop (since they are already “together”, there’s nothing for me to root for.

The beginning was good but this book was trying to encompass too much. II really didn’t seem the point of having the book go on this long.

Interested in this one from Claire Legrand? Buy it here:  Amazon

One thought on “Furyborn – Claire Legrand”