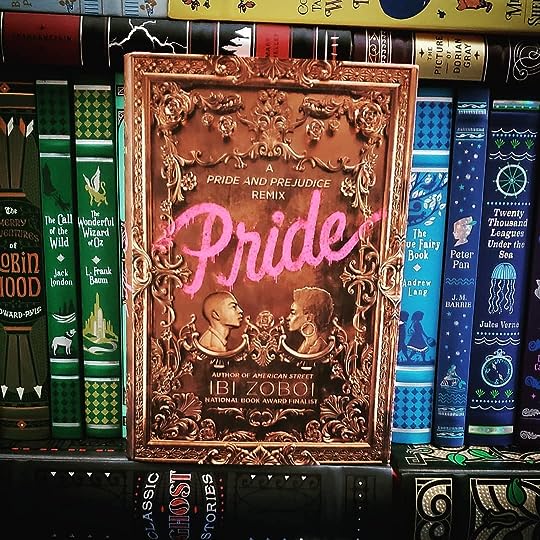 IT’S A TRUTH universally acknowledged that when rich people move into the hood…the first thing they want to do is clean it up.

Zuri Benitez, along with her wild and crazy family, have lived in Brooklyn all her life.

Sure her neighborhood is a little run down, a little worn…but it’s her home. And nothing would ever change it.

Then the Darcy family moves in next door.

Sure the teenage sons are kinda cute but ugh. They’re so rich and nice. They suck.

Meanwhile Janae, Zuri’s older sister, is starting to fall for one of the Darcy brothers…and Zuri (who wouldn’t admit it, even to herself) kinda sees something in Darius (if only he wasn’t such a stuck-up rich guy).

But as Warren, Darius’s old friend, comes to town, everything Zuri thought she knew is thrown out the window.

Will close off her heart to the world? Or should she open herself for change?

It was a Pride and Prejudice retelling, which is always a plus for me.

But I strongly feel that when you write a retelling, I feel like you need to bring something else to the table. And when my greatest takeaway from the book is, oh thank gawd this torture is over…to me it just didn’t succeed.

The main reason I pulled away from this book is the relationship drama.

I LOVED all the skillful drama in the original tale…but this version just had drama heaped upon drama. It felt petty and unnecessary.

Looking through the other Goodreads reviews, I’m glad I’m not alone in this assessment.

Zuri just felt annoying to me. She just screeched on and on and was just so mean to Darius.

Which Darius – by the way – was a gosh-dang saint and all I could think about is that he deserved so much better than Zuri.

The relationship between Darius and Zuri felt forced to me – it’s like…we know they have to end up together because (hello) Pride and Prejudice retelling…and yet, they never seemed to click in a way that would make them last long-term.

Their personalities clashed again and again, and I just ended up wishing Darius would’ve dumped her and found someone who fit with him better.

And I feel like there was so much more potential to the book – the author could’ve used it as parallels for so many situations and really delved into some hard-hitting issues…but anything the author may have tried was just overshadowed by the drama. Again. And Again.

All in all, this retelling just shouldn’t have been told.