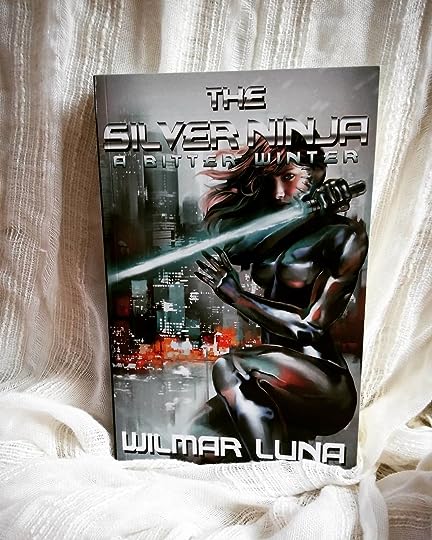 She earned this suit and had every intention of using it.

Cindy Ames, a former NYPD officer, currently alternates between gymnastic teacher and security guard – a far cry from what she once was.

Two years ago, she lost her partner in a horrendous incident, which cost Cindy her badge, her dignity and her pride.

You both knew the risks of the job and it could have been anyone. Don’t let Dan’s passing ruin your life

Ever since, she’s spent every waking moment tracking her ex-partner’s killer…well…in between the classes and Rent-a-Cop gig. (Money’s been a bit tight ever since her hubby spent the family fortune…)

Her most recent job – acting as a security liaison for the the mayor during a technology conference – was going to routine until things went wrong, very wrong.

A local terrorist cell made an appearance and Cindy’s cop-instincts kicked into full gear to save the mayor. But soon Cindy is fighting for own her life – and losing.

Faced with the very real possibility that Jonas (Cindy’s husband) could lose her forever, he decides to take matters into his own hands and use an experimental drug to repair her broken body.

Only the consequences leave Cindy a shell of her former self…that is until her thoughts turn to Jonas (and his team)’s semi-secret (and probably very illegal) super suit.

Cindy cannot stop thinking about it – all her problems could be solved, if she can get her hands on that suit…

And thus, a new superhero is born – but with herself hell-bent on revenge, it might just be impossible to consider her a hero after all…

“Some people are born to fight,” Jonas said.
“Are they born to kill too?”

Whew – this was the dark-and-gritty superhero story I was waiting for!

I am an absolute sucker for superheros and this book was no exception. I really enjoyed the plot, the dialogue and (above all) the characters.

In the first installment of the Silver Ninja series, we getCindy’s origin story – complete with stealing forbidden tech, an evil “twin”, and evil secret corporations intent on ruling the world.

What made this one stand out was the realism of Luna’s characters.

Cindy’s problems were never magically solved by having the suit – well, sure she could actually kill the Big Bads much easier, but her personal problems were just as real and solid as before – it humanized this overpowering individual.

Plus, there was plenty of heart-pounding-action to guaranteed to excite the audience. Reading the fight scenes made me feel like I was right there, in the first row.

The blade thrust towards her eyes. She leaned back, ducking left and right as the knife slashed in front of her face.

The only thing that threw me out of the book was the science – it was a sticking point for me.

I could tell that the author did quite a bit of research, but there’s always that fine line of what’s believable in the alternate reality and what’s stretching it.

Most books I read toe that line, but in this one we were taking a few steps over. Maybe a leap or two (ohhhh…convenient memory losses…such a pet peeve…).

On the plus side, this novel had just the right humor. I mean, maybe it’s just me, but I find lines like this to be hilarious:

“I thought we were going to tun into each other’s arms and kiss as if today was our last day on Earth. Like the movies.”
“There’s two dead bodies on the floor and you killed them.”

(Probably not the author’s intent, but that’s my humor for you.)

Overall, an exciting start to a promising series.

Interested in this one from Wilmar Luna? Pick up your copy from:  Amazon

One thought on “The Silver Ninja – Wilmar Luna”