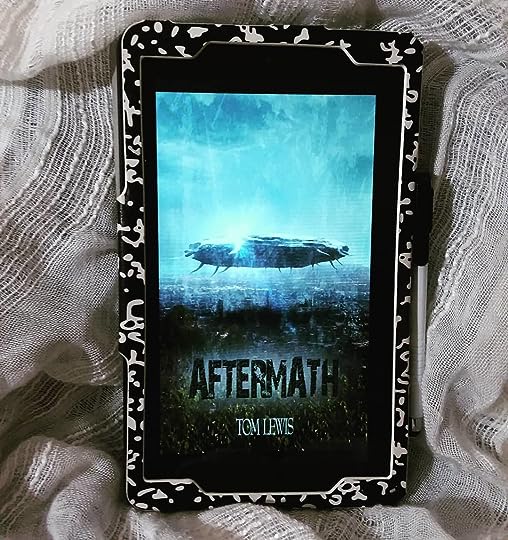 Paige O’Connor (part-time sarcastic snit, part-time teenage hoodlum) along with her brother are having just about the worst possible day ever.

Actually, most of the world is having the worst day ever.

“This isn’t the end of humanity, but rather a new beginning. Under our guidance, mankind has been given a second chance…While we mean your species no further harm, any disobedience will be met with your annihilation.

Only their escape doesn’t nearly go to plan and soon Paige is forced to do the unthinkable – infiltrate the aliens and steal back the person who means the world to her.

I was thoroughly entertained throughout this story. It had all the elements of a great YA book – witty banter, common sense and great humor.

Tom Lewis does such an amazing job with the teenagers in his book. When I read Paige’s words, it honestly felt like I was reading my own high school conversations (well, if all my conversations were as witty as Paige’s):

“And you, Paige O’Connor, are going to make such a pretty little spinster if you don’t get over your whole ‘guys suck’ thing.”

Shelby just shook her head, and handed the cup back to Paige. “Better start practicing those knitting skills, girl.”

I also wholly appreciated how (nearly) everyone was so grounded – so full of common sense.

It was almost disarming to see characters in YA lit being so darn logical. No one ran headlong into danger (well, at least no one did that without good reason).

Heck, when the invasion began, Paige and her brother made a beeline to the sports store. Why? They decided stock up and to skip town to avoid death, destruction and dismemberment.

Honestly, why do the main characters in the YA lit I read never think of this?

I enjoyed the humor sprinkled in throughout – especially when there characters had to do something dangerous.

“Everyone ready?” Drew asked, as he and Randy joined the girls.

“I guess,” Paige shrugged, throwing her backpack over her shoulder. “But for the record, I think this is a really stupid idea.”

Overall, I was just absolutely swept up in this story. I had such a fun time reading this one that I honestly wish it was longer. There was so much more that could’ve happened that I’m sorry it ended so quickly.

“Did you know you look cute when you’re wet.”

She was too tired for this. “Do you wanna feel how hard I can punch?”

Fingers crossed that there will be a sequel!

With many, many thanks to the author for a free copy in exchange for an honest review.

Interested in this one from Tom Lewis? Pick up your copy from:  Amazon

One thought on “Aftermath – Tom Lewis”