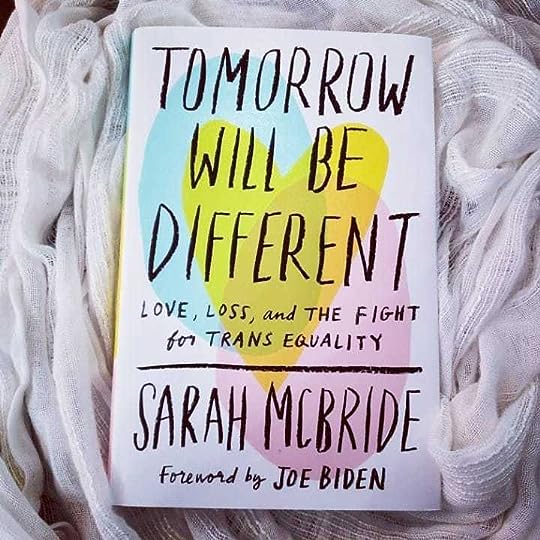 Nearly cried like four times, actually cried once. If I could have rated it higher, I would.

And every day that we rob people people of the ability to live their lives to the fullest, we are undermining the most precious gift we are given as humans.

Sarah McBride, a prominent activist, was the first out transwoman to work at the White House, under the Obama administration.

It’s rare to know in real time that what you are about to do will define the course of the rest of your life.

A native Delawarean, she was always excited about politics – a signed Joe Biden schedule being among her treasured childhood possessions – so it was natural for her to turn that love into a career.

But, she first had to overcome her own hurdles.

I had tried to say the words “I’m transgender” to my mirror. The shame would engulf me…

But with the support and love of her friends and family, Sarah McBride began her transition.

She speaks with unparalleled honesty about not only the transition but also what it felt to now live as a woman.

I finally had come out of the closet, only to find myself stuck in the kitchen.

It was an interesting contrast to see how her worldview changed once she transitioned – she went from confidently taking taxis to hoping that the creepy driver wouldn’t take her down an alley, and to beingdownright terrified that he would find out that she’s transgender.

Sarah continued her life newly devoted to increasing trans rights. She felt that it was her personal duty to help everyone without a voice in politics.

Each generation, it became clear, was defined by whether they expanded equality, welcoming and including people who had once been excluded or rejected.

And she successfully lobbied several bills – including one that banned workplace discrimination in her home state.

The ground was shifting beneath our feet; you could almost feel it.

Sarah McBride also describes the soaring love she felt for her husband, Andy, who stood right by her side as a fellow activist and as a transman.

And she shared mind-numbing crush when he was diagnosed with cancer and ultimately passed away, four days after their wedding.

Sarah includes her personal experience with the North Carolina bathroom bill, and the public outcry when she snapped a selfie in the women’s bathroom.

I knew the stories would diminish in a matter of days…but after being told to kill myself thousands of times for days, the thought of suicide became a rational thought in my mind for the first time ever.

In short – this book was beautiful.

For a biography that takes place over just a few short years, it wasabsolutely mesmerizing. I could not put it down – seriously.

Sarah McBride’s complete honesty really brought this book to life. Shedetails every little aspect of her life as a transwoman in America – and as the audience, we felt every little high and low with her.

In particular, I really cheered when she finally got her corrected drivers licence.

I couldn’t stop looking at it once I had it in my hands.
“Sarah Elizabeth McBride,” it read. “F.”

And she chronicles every moment with her husband so incredibly well that I completely fell in love with their relationship – so much that I could barely read the section about her husband’s cancer – the tears were flowing so fast.

This is truly a book to remember – and one that everyone should read.

With many thanks to the author and publisher for a free copy in exchange for a honest review.

Interested in this one from Sara McBride? Buy it here:  Amazon