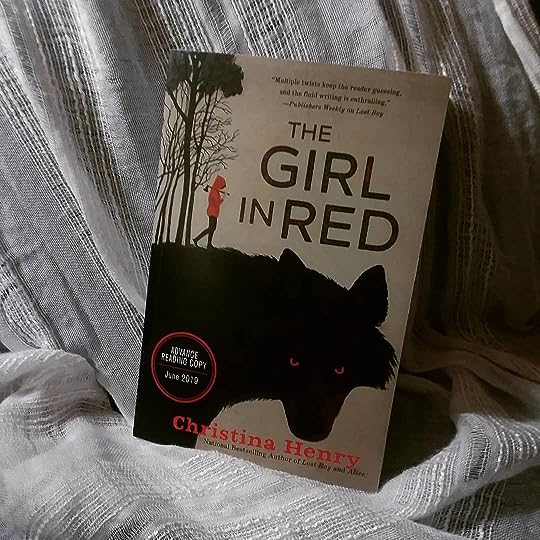 Who’s the wolf in the woods now?

Red, a young woman on her own, is travelling through the forest in a post-apocalyptic world.

…they had watched in horror as town after town and city after city was decimated by this sickness, this mysterious terror that had sprung up…

“The Crisis” (as she calls it) has already ruined most of the world and nearly all of her family and now Red is alone in the world – almost.

Grandmas didn’t die from stuff like that. Grandmas went on and on, enduring year after year, shriveled and worn but somehow ageless.

Red’s grandmother lives isolated in the woods, in a self-sustaining little cottage hundreds of miles away.

And once Red makes a plan, she sticks to it.

So what if she’s alone in this world?

So what if her supplies are running low and she only had one leg?

So what if everyone and everything out there is trying to kill her?

Grandma is out there, and Red is going to see her.

Only, her journey is not nearly as easy as she thought. The woods areteeming with wolves – both animal and human.

The fellow across the fire gave Red the once-over, from the wild corkscrews of her hair peeking out from under her red hood to the small hand axe that rested on the ground beside her.

But the joke is on them, because if there is one thing Red has been preparing for – it was the apocalypse.

And there is not a thing she would not do to get to where she wants to go.

“I am going to my grandma’s house, and if you try to stop me I will slice off whatever I can reach and leave you here to bleed to death.”

In short – this book was everything that I could have hoped for and more.

I have read so (SO) many tellings (and retellings) of classic fairytales that it takes a really, truly amazing one to knock my socks off.

Well. Let me assure you – my socks are in the next country.

Once I picked it up, I could not put it down. I honestly cannot remember the last time I finished a book in a single day.

I am constantly frustrated by the absolute idiocy of main characters during apacolypse novels. I honestly wonder how most characters make it past Ch 2 and Red is wonderfully the complete opposite.

Between her confidence, her logic and her stone-cold killer instincts, I was completely fascinated.

“I see two bodies with open chest wounds and some mars on the floor. Until I actually see an alien life form crawling on the ground, I’m not buying it.”

The plot was fast-paced and exciting – even though this was a retelling, I still had no idea where the story was going and I loved it.

I think I’m just going to have to buy everything Henry has ever written.

She had to get to her grandmother, and she still had a very long way to go.

Interested in this one from Christina Henry? Buy it here:  Amazon