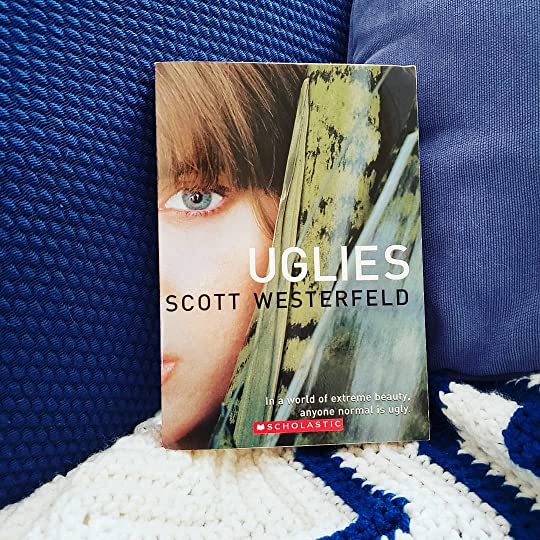 “In a world of extreme beauty, anyone normal is ugly.”

In Tally Youngblood’s society, everyone obtains absolute physical perfection – the perfect skin, hair, eyes, literally everything. At least, after you turn sixteen and undergo the right operations.

Tally, at age 15, is an Ugly right now but after her birthday, she will get to become Pretty. She can then move out of the Ugly Dorms and into New Pretty Town. It’s all she wants.

After all, who in their right mind would choose to remain Ugly?

All she has to do is wait to turn 16. With all of Tally’s friends already Pretty and living in New Pretty Town, it’s shaping up to be a very long, boring summer.

Enter Shay, another Ugly, who Tally meets during one particularly wicked trick (Tally grabbed a bungee vest and dived off a Pretty building).

Shay has the same birthday as Tally and for a while the two of themspend all of their time together.

“…I want those perfect eyes and lips, and for everyone to look at me and gasp. And for everyone who sees me to think Who’s that? and want to get to know me, and listen to what I say.”

“I’d rather have something to say.”

Then, Shay comes to Tally with a wild story. There are people, “Smokies,” who live outside of their city and would rather remain Ugly than turn Pretty.

A few days before their birthday, Shay takes off to find the Smokies,leaving Tally to go through the operation along. Only, on the day of the operation…Tally finds herself barred.

She must lead the Specials (aka Special Circumstances, aka the police task force) to the Smokies or she will never turn Pretty.

So, armed with nothing but dehydrated food, water purifier, hover board and a sleeping bag – she sets off to become the Judas Goat.

She’s waited all her life to become Pretty – there’s no way she wants to be stuck with her Ugliness forever.

Only, along the way she finds friends in unexpected places, she learns things about herself that she never thought possible and discovers something far more horrifying about the Pretties than she could ever have imagined.

Your personality – the real you inside – was the price of beauty

And the overconfident Specials are going to get more than they bargained for.

“Maybe they didn’t want you to realize that every civilization has its weakness. There’s always one thing we depend on. And if someone takes it away all that’s left is some story in a history class.”

Rereading this one as an adult really made this one pop in my mind. It definitely passed the test of time.

The only thing that bugged me was that this one did manifest one of my pet peeves. Namely, the tension is motivated and maintained by people keeping secrets. It’s just – why can’t they communicate??? (Oh yeah, it’s cause then there wouldn’t be anything to drive the plot anymore.)

Audiobook Comments
Well-read by Emma Tremaine. The guy voices sounded a bit weak but it was still a great one to listen to!