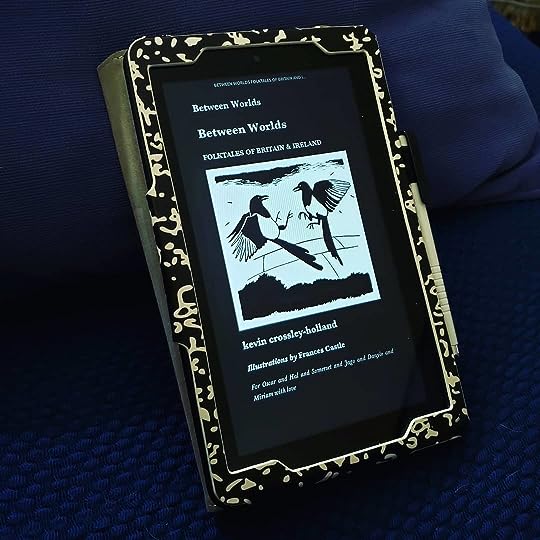 “And who shall we put in the coffin?”
“No need to draw lots” said the leader. “Lay Jemmy Nowlan in the coffin.”

Poor Jemmy Nowlan is whisked away on an unbelievable adventure…one that take his life at any moment. This one was interesting but a bit abrupt with the plot – things shifted…really quickly.

Three heads of the Wall

And the princess felt quite powerless to overcome the growing distance between them. There was no place for Eleanor in her own home.

Eleanor is slowly being edged out of her own family by her stepmother. She decides to journey and (like the title) finds three heads on the wall. Her sister decides to go on a similar journey…only to have far different results.

“Here we are!” said the big brown dog. “You’ll like it here.”
Corinna didn’t like it at all.

Very reminiscent of beauty and the beast only with an interesting twist.

No need to count the missing sheep: I would have fallen asleep too – but then I saw your mouth open, and out flew a butterfly as white as first-day snow.

About as wild as as the quote above. People were certainly creative when they didn’t have internet.

King of the Cats

Nine black cats! They all had white chests, and they were coming down the path carrying a coffin covered with black velvet.

Our narrator, Harry, stumbles upon something quite extraordinary and unforgettable. But when he tells anyone they (unsurprisingly) don’t believe him.

The baker was thin-lipped; he never game so much as a crumb away. But his daughter was worse.

But when the Moon did not shine, out came the Things that live in the darkness. They wormed around, waiting for a chance to harm…

The Moon comes to earth as a beautiful woman and notices a man trying to cross a marsh. The Things are after him and she must decide – save him, or save herself.

Thousands of warriors lay there, sleeping.

Our narrator needs money. The money is guarded by thousands of sleeping warriors who can wake at a moment’s notice…I wonder what could possibly happen…

Their skin was green, their hair was green; they wore green clothes.

A group of hot, tired and hungry farmers stumble upon something quite extraordinary…but discovering that something and keeping it alive are two totally different things.

The Last of the Picts

They were very short, with red hair and long arms and feet so broad that when it rained they could put them up over their heads and use them as umbrellas.

The Picts are long since gone, but stories of them will remain.

The Oldest of Them All

The eagle soared over the hill and the valley and found the blackbird sitting on a stone.

An eagle is looking for a new partner and becomes obsessed with finding out how old she is. Unsurprisingly, the eagle receives some unexpected (but not unwelcome) news.

Then the Lady of the Green Gown took a handkerchief from her pocket. She shook it and disappeared…

What a wild ride!

The Peddler of Swaffham

But the man in scarlet came a second time…

Someone keeps telling the narrator to go somewhere in a dream…should he listen? Or give it all up>

Don’t ask me my name. I’ve heard you have names. I have no name.

Somethings creep in the dark and should remain there…

The Worm is wreaking devastation across the land – only one man can stop it.

In the name of every man, woman and child living in Brent Pelham – why, in his own name, modest as it was – he had to fight the dragon.

Oh no. A dragon? Time to get the pitchforks.

The bellwoman has a story to tell – it is up to you to listen.

The Piper and the Pooka

Up behind the piper crept a shape.

There was once a little old village where a woman lived with her giddy daughter.

Tim Tit Tot – a man as crazy as his name –
helps out a lady engaged to the king with a spinning problem.

Then the music faltered and stopped; the dancers stood still…Lusmore watched as the little people crowded together…and began to whisper.

…there was a horrible yelling coming out of the cradle

An unbaptized baby was a serious worry back in the day…

The Farmer and the Boggart

..his visitor was a squat boggart; his whole face was covered in hair and his arms were almost as long as fishing poles.

A clever farmer, a not-so-clever Boggart…I wonder what will happen…?

Then I saw them quite clearly – little men and women dancing in a ring.

A shepherd has a wild tale – almost unbelievable, no?

“You can see me, then,” said the little man.
Joan nodded.

Whenever a fairy asks if you can see them…just SAY NO!

And there and then, right in front of the round-eyed farmer, the little man and Charger sank into the ground.

A man tries to sell his charger and something quite…unusual…happens.

The kitchen was a magic box, full of light and dancing shadows.

The farmer’s wife bakes a special treat with disastrous results!

It was a Sunday night in July, and Tom was in no hurry to get back to High Farm.

Tom is about to go on a wild journey thanks to a certain mysterious Yallery Brown.

But when the wind opened its throat and rain swept across the slopes…the farm seemed alone then, alone in the world.

Widowed Megan and her baby, Gwyn, must survive against all odds. A sprinkling of fair folk certainly makes their lives more interesting…

The Fine Field of Flax

I am part of this, no less than the green curve of the hill, the twisted tree, the ring of dawn water.

We listen to an incredibly interesting life story.

The girl jumped off the rock. Her eyes were sea eyes, wide and flint-gray.

One should never trust the sea.

The Black Bull of Norway

Whom knows whom I’ll meet? Who knows where I’ll go?”

A wise woman and Bracken have a rather interesting conversation.

MossycoatA poor widow and her clever daughter find a way to obtain the prince’s hand. Reminiscent of Cinderella but without the child-like wonder.

Oh! I forbid you, maidens all,
Who wear gold in your hair
To cross the plain of Carterhaugh,
For young Tam Lin lives here.

Just goes to show…always use protection. Otherwise you may get embroiled in a fairy scandal.

The son of the king of Ireland relished tests of strength and trials of wit. A love of chance…

A greedy prince and his love for card games soon puts everyone in the kingdom at risk.

“Have you no sense? They’re all around. You know they can hear you, the bogles.”

The bogles are not to be messed with as our narrator soon finds out.

A Village of Fools

“Trying to drown this eel,” said one old man.

The quote says it all!

Oh the wild lies that were told pre-internet!

The Cow That Ate the Piper

The frost tightened his white fist. Bushes by the roadside hunched their shoulders; the road began to glitter.
“We’re all dead men,” said the piper, “if we don’t keep moving.”

A deadly cold and many questionable decisions.

…a Welsh miner was walking slowly along the shady lane…

The miner listens to a voice…that isn’t there.

The Wise Men of Gotham

Unfortunately, this has nothing to do with Batman.

Magpies in the Crabtree

Magpies in the crabtree.

A knight came riding in from the east…

A complicated riddle…I will have to think on this.

So Samuel set off for the graveyard, asking the way, and rubbing shoulders with all the horrid things that glowered around him.

Never go to a graveyard – especially at night.

Slam and the Ghosts

He let himself quietly out of the cottage and, under stars sharp as thorns, walked up to the graveyard.

AGAIN – do NOT visit graveyards at night!

She pushed open its creaking door and saw skulls and thigh bones and bones of every kind gleaming in front of her.

Sometimes the bravest is not necessarily the strongest!

Short, violent and to the point.

“I cant promise you a quiet night, though,” the old woman said. “This cottage is haunted.”

Overall, this was an enjoyable read. I really liked the summary at the end, where the authors talked about how these stories grew and developed over the years. Wish that would’ve happened after every chapter rather than at the end!