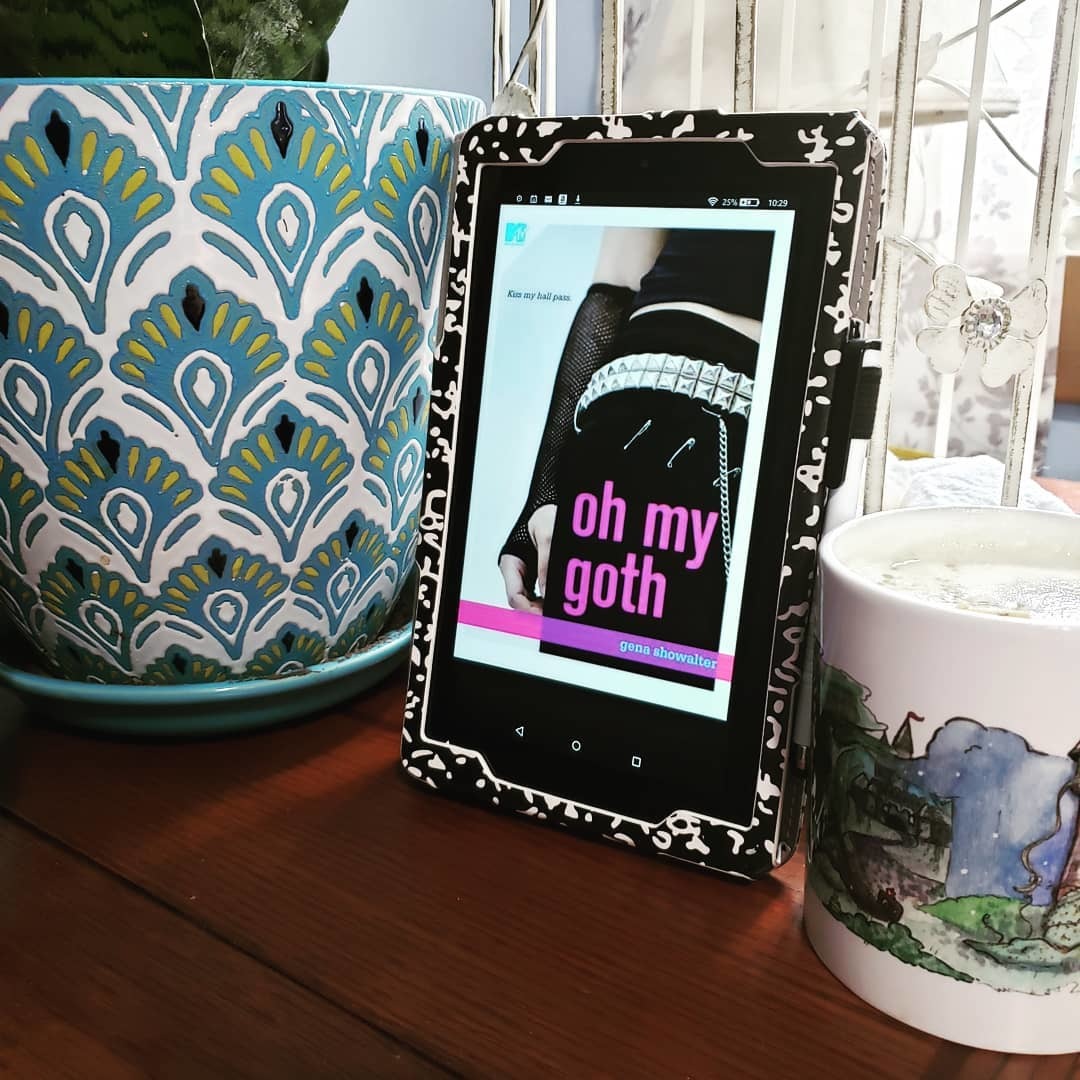 NOTE: This review for for the original Oh My Goth edition

Much like Kanye West and Taylor Swift, or like Anthony Bourdain and Paula Deen, Jade (a Goth) and Mercedes (a “Barbie”) are mortal enemies.

Mercedes commands an army of Barbies, who delight in kicking Jade when she’s down.

I’m not a bad person. I haven’t killed anyone…So why do people look at me as if the world would be a better place without me?

It feels like no matter what she does, Jade always gets the short end of the stick. Even her teachers participate in the daily mocking and tormenting.

“Are you paying attention, Miss Leigh [Jade], or are you praying you never come into contact with a wooden stake?”

And when Jade fights back, her principal sentences Jade and Mercedes to an experimental virtual-reality drug-induced punishment – resulting in a“Freaky-Friday-esque” swap of social status.

Goths are totally “in”, anything remotely preppy is totally out and Jade is the new Queen of Cool.

But even with that power, she soon realizes that not everything is perfect.

He’s not one of us, Jade, and you need to realize that. He belongs with the freaks. Look at him. He’s not wearing any eyeliner…

Despite becoming the new “it” girl, all Jade wants to do is go home – but as the stakes get higher, will she ever manage to claw her way back to reality?

Overall, this one wasn’t terrible (and I was expecting a real doozy).

To put this into perspective, I’ve read Gena’s other series (Firstlife) and wow. Those were bad – each book worse than the last. All three made the top 5 worst books I read this year.

So, when I heard that Gena was re-writing her Oh My Goth standalonebecause the reviews were so bad, I just had to check out the original (and the “revamped” version).

The original was alright.

I honestly don’t really see why she would redo it.

This was easily 10x better than the Firstlife series (and Oh My Goth was published ~10 yrs before Firstlife) – which really makes me wonder – how does the writing quality go down? That far?

Anyway, there were a few areas of the book that were a bit…too much. In particular, there’s the virtual reality, Gena’s signature cringe factor and the love interest.

The principal makes Jade’s and Mercedes’s parents sign a permission slip to allow a weird doctor (operating out of the woods) to inject the girls with alternate reality drugs and computer simulations…all to bring a bit of peace to the school.

The sheer amount of man power and money spent on developing such a realistic virtual reality game…I just had to wonder why it was being used ontwo catfighting teens opposed to interrogating terrorists or toppling governments.

I really think Gena should’ve gone with magic for the explanation – coming up with this pseudo-real situation just brings up so many plot holes.

Now, I’ve only read the Firstlife series by Gena but wow. If you are looking for a CRINGY main character – that is a go-to book.

And while Oh My Goth does serve up on the cringe, it is clear that Gena’s signature cringe factor is still under development.

For example, Jade interrogates and berates her teacher (who admittingly serves it right back to her) and then she gets all huffy when she’s thrown out of class.

Oh, and did I mention she made up her own catchphrase? Cause that always works real well in high school…cringe.

This wasn’t all terrible – there were a few moments where Jade’s snarky-ness was downright hilarious. Especially when she and Mercedes realized that they swapped social standings.

“Have you noticed that nothing is right? Nothing is normal?”
“No,” I said dryly. “I haven’t noticed. I didn’t have my bowl of Smart Girl cereal this morning.

But (unfortunately) there were just as many moments that did bring out thecrinnnge in me. In particular, was the way the author informed audience about how different the world is now that the Goths are in charge.

“What exactly is Coffin Club?”
“Duh. Like you don’t know. We get together one day a week and talk about death, that kind of thing. This week’s meeting really sucked without you. We ended up leaving early without planning our funerals or anything.”

It just felt clunky and awkward every time Jade didn’t know something she was supposed to know.

Plus, Coffin Club? Really? Realistically, how many meetings could it possibly take to plan out one funeral?

“Clarik! Stop, okay. You have to stop.”
He didn’t even pause.
“Clarik.”
This time, he faced me. There was blood on his hands and a stream of crimson from his cracked lip. Bobby lay on the ground, moaning…I grabbed Clarik’s hand and took off in a dead run.

Ohhhh wow. Would you look at that, another violent and unstable bad boy(TM) who’s actually super kind and sensitive once the main character looks past his bloody past.

And he’s a great kisser. Nothing like pinning all your self-esteem on a boy… Good thing she’s Goth and she’s beyond such teenage tropes…oh wait…

Last Thoughts
Honestly, this one wasn’t that bad. I had to suspend my belief for a moment or two…but it was an entertaining and quick read.