Link Neal – half of the dynamic duo known as Rhett and Link – is best known for co-hosting Good Mythical Morning (GMM), a wildly popular YouTube show.

Link has been best friends with Rhett ever since first grade. As legend goes, the two were held in from recess for using inappropriate language and had to color in pictures of mythical animals as punishment (ironically, their “punishment” eventually led to their careers as YouTubers).

Remaining close friends throughout, Link would go on to make home movies such as Gutless Wonders and a 25-minute film-parody about Oedipus Rex. They both went on to be roomates at NC state and study engineering.

Link and Rhett began GMM as a morning talk show in 2011 under the title of “Good Morning Chia Lincoln” which centered around (unsurprisingly) an Abraham Lincoln Chia Pet. The show featured short, comedic episodes but abruptly ended when half of Chia Lincoln’s head died. 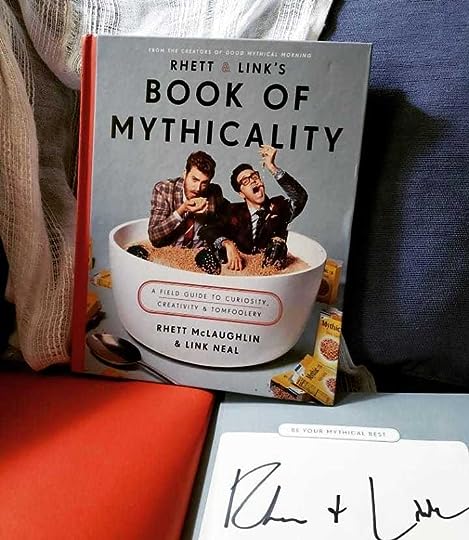 Upon moving to LA, the duo began Good Mythical Morning. The dabbled briefly in The Mythical Show, which contained 30 minute episodes with multiple comedic segments but ultimately went back to the daily GMM format.

Over the years, GMM has grown to include taste-tests, various hot pepper challenges, competitive  games, and guest stars such as Pewdiepie, Daniel Radcliffe, Megan Fox and more. Good Mythical Morning, which as of October 2019 has 2,328 videos, 15.8 million subscribers, and 5,793,556,119  total views.

In October 2017, the duo published Rhett & Link’s Book of Mythicality: A Field Guide to Curiosity, Creativity and Tomfoolery, which was semi-auto-biographical with a dash of life advice and a smidge of an activity book. It quickly became popular among fans (myself included) and sparked much speculation whether they would adventure further into the literary realm.

Much to many (many) fans delight, on October 26th, Rhett and Link are set to publish their second book – The Lost Causes of Bleak Creek. This young adult book follows the lives of “Rex” and “Leif” (based loosely on the authors) as they discover something sinister lurking just below their idyllic town’s surface.

I’ve read and reviewed both of their books and loved them. I cannot wait until The Lost Causes of Bleak Creek is published and hear all of your thoughts on it.

I was absolutely thrilled when Link agreed to be interviewed and whew, I had a tough time narrowing down all of the questions I wanted to ask!

Without further ado, here’s Seven Questions on a Saturday!

1) What is your ideal writing spot? Is there anything you “have to have” in order to write?

(I think this answer comes out below in the question about the writing process.)

2) The Lost Causes of Bleak Creek is fantastically atypical young adult book. One thing that has stood out to me is the sheer volume of distinct characters. Is it difficult to balance so many perspectives in one book? Do you have any tips for managing characters and perspectives for aspiring authors?

I agree, it can be challenging to manage so many characters’ points of view and motives.  But I think our task was made a little easier because they all lived in a world that we spent our entire childhoods immersed in.  It’s not that each character was modelled after a specific person, it’s more that we were very confident in how people in small town North Carolina operate.  For each character, it was important that we knew their personality profile, what they wanted more than anything, and what they feared more than anything. And that became the filter through which we evaluated “would she say this?” and “would he do this?”

3) Could you give us a brief overview of your writing process for The Lost Causes of Bleak Creek?

Collaboration has always been a hallmark of the things we create.  Whether it’s a song, a sketch, or a new show format (like GMM), we’re always working very closely at each step of the creative process.  But that doesn’t mean that we don’t divide and conquer. Over the past 13 years of “officially” working together, we’ve learned to lean in to our own strengths, while also deferring to the other when he’s stronger.  And building on that, we’ve learned to bring others in to our process and lean on their gifts as well. Our writing process for the novel is a perfect case study of that.

To start, Rhett and I put in a lot of intense work to conceptualize the story.  We invited Stevie Levine (Chief Creative officer at Mythical) to give us her intial take, and then broadened the circle to include our editor Matt.  Then, Lance Rubin, an experienced novelist and generally great person, joined the team. At that point, we had many rounds of clarifying, breaking down, and rebuilding the story.  Once Rhett and I were happy with where we were on the chapter by chapter outline, the writing began.

Rhett was very passionate about writing, while I am instinctively an editor.  So, for each chapter, Rhett and I would know exactly what we wanted to accomplish, and then Rhett and Lance would tackle first drafts. Those first drafts were incredibly collaborative between Lance and Rhett as well, no two chapters coming together in quite the same way. But, in general, Lance focused on bringing the outlines to life as cohesive, compelling stories and Rhett focused on voice, tone, and humor, as well as taking the lead on the aspects of the story that hinged largely on our real life experiences. Rhett also spent time bringing the small town south to life as a character in itself.

After those drafts were coming in, I would offer fresh eyes and my take all on everything.  There would be some back and forth and then Rhett would make a final pass on every page. The division of labor would vary depending on how much other stuff we had going on at Mythical, but it was very important to Rhett and I that every single word reflected our vision and came from our hearts, so to speak.  (On this point, Lance was a stellar collaborator. Especially considering that we only met in person once – and that was after we’d been working together for five months!  Shout out to conference calls and Google docs!)

So instead of all three of us doing the same tasks, we developed a layered approach of writing and editing.  And then Stevie became yet another layer of feedback. That happened chapter by chapter. And then Matt would give feedback on larger chunks of the book all at once, which was a nice way to get a different kind of feedback (pacing, character development; bigger picture analysis.)  Overall, this process kept us moving forward and never getting hung up, despite our busy schedule. And I think it side-stepped ever having to make one huge re-write of everything at once.

4) Names can be among the hardest decision for writers while others pick them at random. I’m curious if you found naming difficult for The Lost Causes of Bleak Creek. Could you explain why or how you chose the names of your main characters in your books?

After a few months of referring to our main characters as Rhett and Link in the outlining process, we really started to get annoyed at ourselves.  It felt like we were speaking in third person. Or, we’d say “I” did this; and, “you” should do that. It was weird. Plus, we worried that the protagonists sharing the names of the two authors would illicit eye rolls.  So, we changed em. But we wanted to give a wink (albeit an obvious one) to whose experiences inspired this story. Rex was easy. But an L-name to replace Link? Leif was equally odd, so we went with that.

5) In either The Lost Causes of Bleak Creek or The Book of Mythicality, could you give an example of something you wrote for the book that was later edited out? What made you decide “this has to go!”?

Very early on, we conceptualized our story opening with a scene at a good ole’ southern “pig pickin’” (what some may call a pig roast), and paired with that, we developed a “the pork is people!” cannabilism storyline.  We actually thought it could be pretty funny, but once we started factoring in all the other plot points, we could keep it in. But I can’t say that cutting it left a bad taste in my mouth 😉

6) Last time we talked; we spoke a little about the difficulties in finding just the right audiobook narrator for the audio version of The Lost Causes of Bleak Creek. Are you still planning on having an audiobook and have there been any updates? Could you talk about how you went about looking a narrator and what made it so challenging?

We wrestled extensively with the decision to hire a professional narrator because we felt like most Mythical Beasts would expect and hope that we would read the audiobook ourselves.  But our main objective was to make our fans happy by giving them the best novel we could write. And then give them the best listening experience in an audiobook that served the story.  Once you factor in the challenges of two people reading one work of fiction, and all of the best practices that go along with that, we became increasingly concerned that our performances would be more of a distraction to the story than a service to it.  And then, once we discovered that Vikas Adam was excited to sign on, that sealed the deal. I mean, he’s literally in Audible’s Narrator Hall of Fame!

7) Aside from Rex and Lief, are there other characters based off people from real life in your book? If so, who are they and how are their characters different from their real-life counterparts? Also what is your favorite color?

Hi Valerie!  The character of Ben is based in large part on our childhood friend, whose name was also Ben.  Sadly, he passed away many years ago. So we wanted to honor his memory and lasting impact on our lives by writing him into Bleak Creek.  Ben had a love for the outdoors, a curious mind, a quirky sense of humor, and a way of injecting adventure in to our lives. He definitely could’ve survived in the woods and mastered a convincing owl hoot.

Interested in connecting with Link Neal on social media? Check out his:

ps. I interviewed Rhett last week –  check it out!