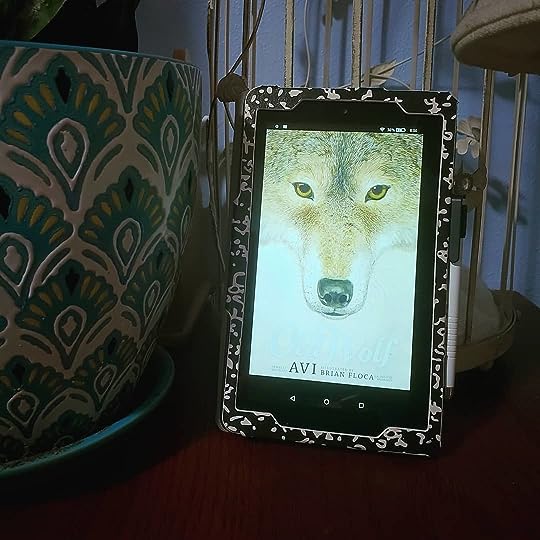 Nonetheless, he was worried. The wolves in the pack had not eaten for two weeks.

Nashoba, an old wolf, has been pack leader for a long time, but his pack had hit the lean months, and some of them getting are getting restless.

Garby, in particular, thinks that Nashoba should give up his position and challenges for leadership.

Uncertain what the outcome might be if he fought the much younger wolf, Nashoba remained absolutely still.

Luckily Nashoba wins the fight but sustains an injury that will haunt him.

He must find food for his pack – but they are all slowly losing hope and now, even the pups are at risk of starving.

Meanwhile, Casey Seton is enjoying a quiet moment before he gets up for the day.

Warm and snug beneath his thick down quilt, he enjoyed the moment. I’m so much older! he thought. No longer just a kid! A teenager! An adult…almost.

It’s his thirteenth birthday and he already feels so much more mature.

As one of his presents for his birthday, he’s given a bow so he could hunt, just like in his favorite videogame.

This starving old wolf and trigger happy young boy are destined to cross paths – but who knows what will happen when they meet.

Honestly, I’m not a huge fan… of anything in this book.

So, first we have the wolf’s perspective – surprisingly articulate and intelligent all things considered.

He’s put into a position where after literal years of dedication and hardship, his pack decides to flip on him because he’s so old.

Kind of put a bad taste in my mouth – it’s like the author decided to give the pack human intelligence but still limited them to their stereotypical wolf behavior. Didn’t quite fit in my opinion.

And then there’s Casey. Oh. Where do I start?

I think it’s a well-established fact that kids are dumb. They make dumb decisions and get dumb results.

So, his parents give him a bow for his thirteenth birthday which (of course) he’s left alone with and soon plays with it in the back yard (“practicing”) – I’m sorry, but eXcUsE mE?

How many parents do you know go, here kid. Here’s a weapon. And then just leave them alone?

Maybe my parents were just overprotective but by-gosh, I never got to touch my bow or shotgun without their express permission/supervision until A) I had completed hunter’s safety and B) was legally hunting on our land.

It just seems like the parents in this book want their kid to accidentally shoot someone.

Anyway, from what I could tell this book was supposed to be one of those reflective all-lives-are-important and coming-of-age books but honestly, I just wasn’t feeling it.

Maybe it was because the kid read like he was living in the fifties (and was playing a game that seemed like it was made early nineties).

Or maybe Nashoba’s life was so over-the-top bad that I kind of rolled my eyes once he hit YET ANOTHER hardship.

But most likely it’s because this book has a more bitter than sweet ending. It just felt sour to me and definitely ensured that I will NEVER pick this book up again.

THOUGH, I cannot fault the illustrator. Brian Floca did an absolutely AMAZING job with the illustrations. I know the cover doesn’t look like much but wow. Loved the sketches and drawings inside.

Audiobook Comments
Read by Kirby Heyborne and ehh…it was alright. I wanted more of a difference in tone/inflection between the wolf and the kid. Seems like things should be rather different, no?

Interested in this one from Avi? Buy it here:  Amazon