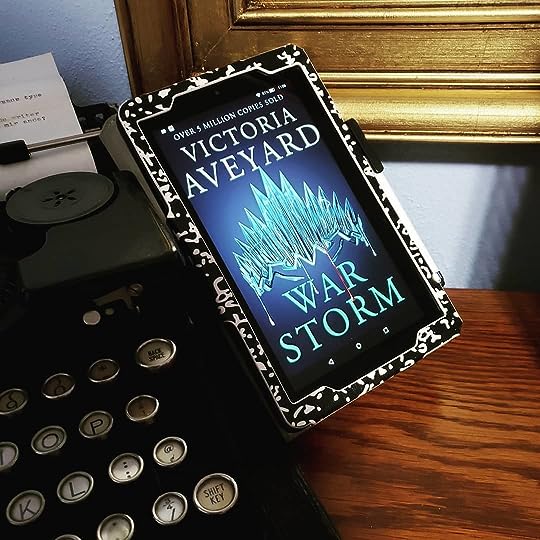 ★
Wow. This one was bad. It’s the kind of bad that makes you set down the book and stare off into the middle distance, and reevaluate the life choices that brought this book into your world.

In an effort to channel my undoubtedly unorganized and enraged rant, I will limit my review to the Premise, Mare, the World Building and the Page Count

I will not be a red queen.

What the point then?

After four over-hyped and under-edited books our Little Miss Perfect changes her mind on a whim?

Did Aveyard forget the title of her own series? How can it be the RED Queen Series without a red queen? HOW?

The characters were (in general) so poorly written this round that I couldn’t believe that Aveyard’s editor let her get away with them.

Mare, in particular, completely blew me over with her nosedive in the personality department.

I thought she was bad before, but she really took the cake this round. I just cannot stand her self-importance and dramatics.

I have to look strong, even if I don’t feel it right now. It’s a lie, but a good lie.

That and her absolute stupidity. Take this observation from Mare:

He loved the crown before he loved me, whether he knows it or not.

This is in reference to the PRINCE of their COUNTRY choosing his KINGDOM over some rando chick he met a few months ago. And yet, Mare is shook.

She later makes another stunning observation:

My jaw hangs open, eyes glued to the horizon…the slopes rise like knife edges, too sharp, too high. Rows upon rows of jagged gigantic teeth. Some of the peaks are bare, without trees as if trees can’t grow up there.

Wowwwwww Mare. The fact that she seems to question whether or not trees could grow on a completely barren mountainside – is this really the person you want in charge of your rebellion?

Actually, that’s a really good point – how is this the person in charge of the rebellion?

She’s 18, untrained and unstable. She has no royal blood, no political connections and definitely no common sense.

She’s not even a good figurehead (like Katniss) and she doesn’t really do anything throughout this entire book.

Sure she was the first red “discovered” who had powers but there are plenty that are older than her, who’ve had their powers far longer and are actually important to the plot.

This whole book has Mare constantly thrown into these political situations solely because she’s the Main Character (TM).

I honestly don’t have much to say on this one…only that after four books of this series (plus two novellas)… I still have absolutely no idea where anything is in this world.

The only thing I can remember is that Mare comes from the Sticks (or is it Stilts?). And that’s it.

2,230 pages and that’s the entirety of my knowledge of her world.

Now, part of this has to be on my shoulders – after all, I just can’t muster the energy to care about anything that happens in their world – and yet, it can’t all be my fault. How does one write four books without giving the audience a clear understanding of the world?

And we never actually figured out what was the difference between Silver and Red Bloods…yes, they’re different colors…but that’s it. Four books. No explanation. (*cue the enraged hair-pulling*)

There is so much filler that I’m starting to admire Aveyard. Honestly, this entire book could’ve been summarized into a few short sentences, maybe half a chapter if you want to be wordy.

Instead, we get the most drawn out, loquacious, verbose, long-winded possible explanation of war games, evil plots and backstories. There are so many overly-described intricate side stories that ultimately have no bearing on the plot – I could feel my brain cells winking out of exsistence.

Okay, so this wasn’t on my previously scheduled rant but I had to throw it in. Did anyone else pick up on the “cool and edgy” hair choices of the characters?

When she moves, I realize her hair is different too. The gray ends are gone, replaced by a beautiful, familiar purple. I love it.

So, you’re telling me that in the middle of the war, in a country that is impoverished, oppressed and practically middle-ages….that our spunky main characters manage to find high-quality, long-lasting, hair dye on the battle field?

Ohthankgodthistortureisover.
Interested in this one from Victoria Aveyard? Buy it here:  Amazon