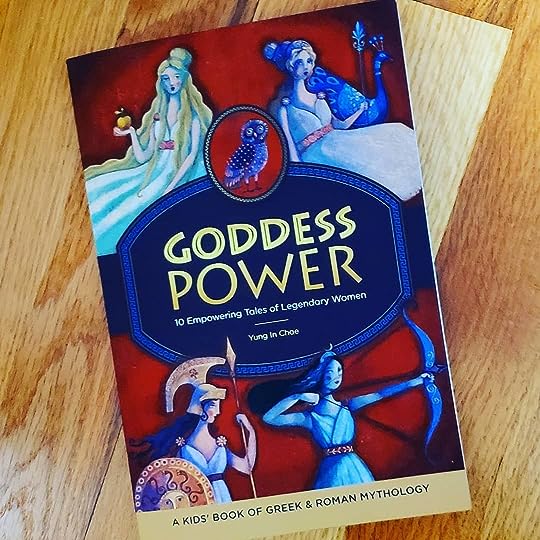 I ended up adoring this one! I had so much fun reading about the Goddesses and the pictures were absolutely STUNNING!

She was the true beginning of all things.

Gaia was the first – and from her sparked so much life. She had many children – though her husband was not always pleased with the results – but a mother’s love (and will) knows no bounds.

As she watched Hestia…Rhea felt a powerful love burn in her chest. She handed the baby to Chronos…

Gaia’s son, Chronos, is probably best known for his paranoia regarding a certain prophecy – saying that one of his children will usurp him. So, he gobbles them down – much to Rhea’s horror. But, she has a card or two up her sleeve…

Hera was the queen of the gods.

Married to Zeus, Hera certainly has her hands full. Between tracking down her husband’s indiscretions and maintaining her iron fist – the last thing anyone could accuse her of is being boring.

She considered it her duty to help women have babies as painlessly as possible.

Childbirth back in the day was fraught with danger – there was so much that could go wrong and each child increased the risk. Artemis remembered her own birth and the pain it caused – and vowed to help women forevermore.

The fates of everybody in the world lay in the hands of three sisters.

Her sorrow bled into the Earth.

Persephone, daughter of Demeter, becomes trapped in the underworld with Hades. For six months each year – she is gone, lost to her mother. And Demeter’s sorrow drains the world of heat and warmth and light. Only to reverse that all through the return of her daughter.

She didn’t need to grow up the way that others do, because she was already who she was meant to be.

Athena – iron-willed and strong – she never doubted herself for a moment. Goddess of Wisdom, she never let a woman or man best her – and woe be the ones who try.

No one was better than the Muses at their various arts. But that didn’t stop some people from trying…

When you are creatively at a loss, the one of the nine Muses are the answer. They guide and aid the struggling artist – but know your place. They aren’t one to be trifled with.

She had no mother, no childhood, no past. Everything about her laid ahead.

Aphrodite is often just considered the goddess of beauty – but there is so much more to her story. It’s wild, whimsical and full of twists and turns.

…there was Circe: a goddess of magic and one of the most powerful sorceresses the world has ever known.

You don’t mess with a witch. Ever.

Overall, I quite liked this one. It’s fun to get a spotlight on the female Greek gods and I ended up learning so much!

With thanks to the Callisto Publisher’s Club, Rockridge Press and Yung In Chae for providing a free copy in exchange for an honest review.

Interested in this one from Yung In Chae PhD? Buy it here:  Amazon