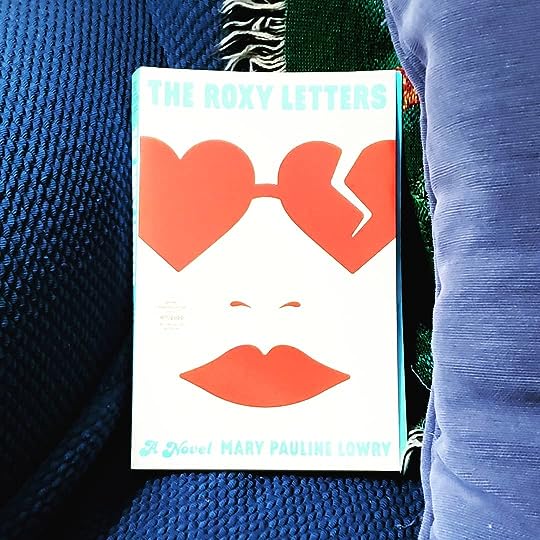 Stop complaining. Stop being so wishy-washy. You want power? Take it.

Roxy – a quasi-vegan, dog-loving perpetually broke artist – has hit yet another stumbling block (could it actually be rock bottom??).

She’s quickly running out of money and desperately needs someone to rent her spare bedroom.

…it’s important for you know once and for all that I will not be getting back together with you.

And along comes Everett – her ex-boyfriend who also is a bit down on his luck and is willing to help her out.

The reader follows along as Roxy loses (and perhaps finds?) herself in the ever-changing world.

I think this one had a lot of potential, but it just wasn’t my style.

The format was interesting – though often the line between letters and an normal narration seemed to blur, but I would say that it worked (for the most part).

The storyline was certainly unique – Roxy’s antics were rather funny at first…but it just didn’t last for me.

I was amused by it for a while but then…it just started to get a little old. It began to wear on me when she made (yet another) bad decision or did something (yet again) that was wildly inappropriate.

Plus she would just blurt out the most cringe-worthy statements.

“I was so busy shaving my legs, trimming my giant power triangle, and vacuuming up dog hair, I forgot to eat dinner.”

And that’s not even getting into the weird sex cult that took up so much of this book’s page space. To put it frank it was…squidgy and just got more TMI as the book went on.

I think perhaps if I was more in the mood for this…maybe I would have enjoyed it more?

I think someone who really has a crude sense of humor and doesn’t mind copious (and I mean copious) sex talk, it could work.

Though, on a side note – I absolutely LOVED Artemis and Anna (Roxy’s two down-to-earth friends) – they almost made the book worth it for me! If the book just had the two of them in it – 5 stars all the way.

A huge thank you to Mimi from Goodreads for sending me a free copy in exchange for an honest review! All quotes come from an uncorrected proof and are subject to change upon publication.