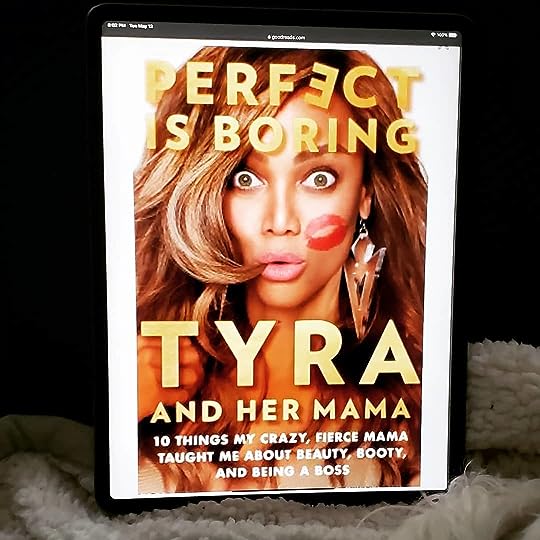 When you step Out of Your Comfort Zone, it is important to stop stepping before you get into the Uncomfy Zone.

Let’s all give a standing ovation to the team of writers, editors, etc behind her book.

Because I’m reading Modelland and those two are on COMPLETELY different levels.

Like this one is in the ballpark of being tolerable and Modelland is on a different equator. Possibly the moon.

So, this book literally goes through ten things that Tyra’s mom taught here.

The overall vibe of this book is that it’s another catchy, upbeat celebrity book all about loving yourself for who you are, embracing your womanhood and never letting society put you down.

There’s period parties, loving your curves and adoring your flaws – no matter what.

But, (and this is a big but, so let me do it again, but in all caps)…BUT…this book feels like a PR statement.

It’s really like a super-long, well-crafted politically correct manifesto for why Tyra is actually the best human being on this planet.

Okay, so I know I sound HUGELY cynical but I’ve literally just watched 22 cycles of America’s Next Top Model and have been addictively looking up all the controversies from that show on reddit…and let me tell you…the person who she is on the show is completely different than the person in this book.

On the show – she’s constantly giving backhanded compliments and putting models in bad situations (remember the one that was groped, or the woman was paired up with the male model who hated black women and they told to play it off like no big deal? Like really?).

She just does so many uncomfortable things to these girls who she is claiming to bring up and mentor. One of the models finds out her friend just died and that week’s photoshoot put her in an open grave and being told to look dead.

Another model was belittled for seeming too African, and then there was the literal blackface photoshoot campaign?

Multiple girls experience panic attacks and are told to power through it. One gets hypothermia and is then belittled for not letting the photographer know her limits.

One year, she picks at a contestant until she agrees to fill in her gap-tooth, then a few years later she shaves a gap tooth into another model.

I’ve seen literal hours of her picking at contestants until they come apart on television.

To put it frankly, show-Tyra is problematic at best and horrifying at worst.

But, I picked up this book – interested in her take on life and curious as to what she has to say.

And the answer? It’s all a misunderstanding.

She truly is America’s golden-hearted sweetheart.

Just don’t pay attention to the makeup pyramid scheme or the hysterical girl in the corner (she’s just ungrateful!).

Part of me wants to give her the benefit of the doubt, for there ARE moments where she does seem to shine on television.

Especially when the book not-so-subtly goes through each and every controversy and presents it as a situation where Tyra took the high road, the path of kindness and enlightenment.

I mean, what are the odds that so many situations are reframed just so and she comes across as the only level-headed woman in the room? Always?

There was a bit about her childhood and a smidge about her career but I was disappointed that it was so sparsely covered.

I was more curious about her life off-screen than rehashing the “I WAS ROOTING FOR YOU” moment for the umpteenth time (and, spoiler, according to the book = Tyra did it out of love and compassion, despite video evidence to the contrary).

I did like it when she talked about the swimsuit debacle and that was probably one of the only moments that felt genuine (well…that and the period party…but I think I’d rather just scrub that one from my memory).

All in all, this was a light read. It doesn’t really go into anything new regarding the controversies other than to explain them away but if you are a HUGE Tyra fan, then this book will align with you pretty well.

Interested in this one from Tyra Banks? Buy it here:  Amazon