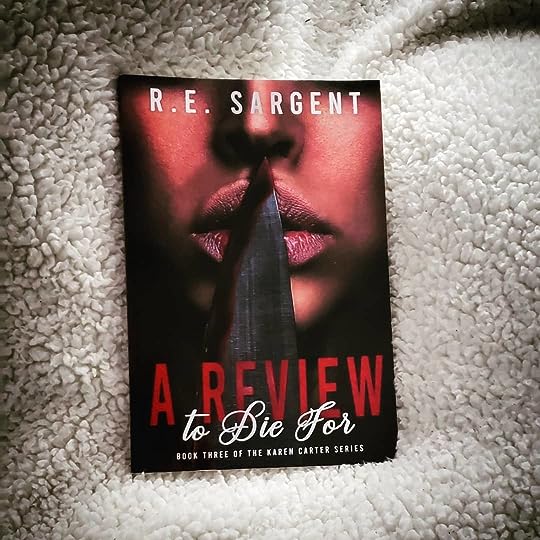 Her thoughts turned to whom she had become.

Jessica always wanted to be a writer – just like her favorite one, Karen Carter (pen name of Lana).

Lana set up her entire life to be run anonymously, partly because of her own bad habits.

Jessica knew that Lana Brooks had killed many of her one-star reviewers. She now understood why.

Just as Jessica settles in and publishes her first books (under Karen Carter’s name)… a new reviewer comes to town.

The longer the review is up, the greater the chance that others will see it and agree. The tide could turn and soon this one “hater” could multiply to thousands.

Well, let’s just say that Jessica isn’t going to take that lying down.

Jessica is learning that while it was quite easy to slip into another’s life, it is something entirely else to live in it forever.

Whew. This one was so much fun!

Though, I did get murdered in it so maybe it wasn’t quite fun for fictional-Miranda (ah well, can’t have everything!).

In case you are curious about why I suddenly showed up in a book…I have a lil story for you.

I picked up One-Star Review by R.E. Sargent purely by chance.

I thought it was a fun concept to have a writer taking revenge on reviewers.

…but I felt like the reviews (the ones that sent the original Lana/Karen Carter into a murderous rampage) just didn’t seem mean enough. They seemed pretty run-of-the-mill when it came to one-star-ers.

Considering all of my experience writing negative reviews, I decided to try my hand at it. I wrote a fake review that would be worthy of death and included it in my review for Sargent’s book – as a just-for-fun thing.

And, R.E. Sargent must’ve agreed with my assessment – cause he contacted me to write a review for his latest book.

I really turned on my mean-ness and wrote a vicious review which was attributed to a fictional Miranda Reads, who catches the attention of Jessica Nichols (and that certainly does not end well).

It was such a fun experience to beta read this book and be a part of its journey to publication.

I really loved watching all the twists and turns as they happened – especially whenever “I” came into the scene.

It was a bit of an experience to read the death scenes – after all, I’m no stranger to them but it’s not too often that I actually see my name attached to it!

All in all, I would highly recommend this book – not only cause I’m in it but also because it’s a fun twist on the writing trope. It’s certainly an amazing adventure and one that I won’t soon forget.

A huge thank you to the author, not only for his patience but also for such a fun bookish adventure