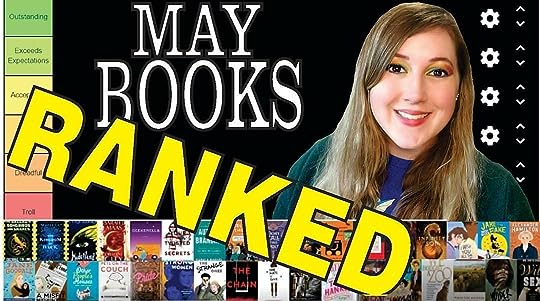 The May Reading Vlog (aka tier listing 30+ books) is up! Now that you know where this one ranks, click the link to check out the rest! the Beast was always there, only a few steps behind, not giving them a chance to close their eyes, concentrate, and find safety.

Sam Vives has survived so many wonderful and horrific events thanks to his powers as a displacer.

As a Displacer he can displace himself in time (aka transfer his consciousness to another being from the past) and experience lives throughout the ages.

And at first, this was an amazingly fun adventure and when he returned to the present, he was initiated into the Displacer secret society.

But as he traveled further and further, he began to realize that his little habit of displacing became part of something far greater…and far darker.

He growled aggressively. ‘I gave you all fair warning, I told you not to come into the past ever again.’

The mysterious Master – the very same who has worked and wormed throughout the Displacer’s society – has a new plan. One that could tear apart everything forever.

…the Master had found out. The Master’s laugh again broke the silence and peace in the church and again Quentin flinched…

Sam feels that vengeance is the only answer – but what happens to your soul when you turn yourself fully to revenge?

‘What has made you so bloodthirsty, Sam?’

Whewww – I got chills.

This series has been SO much fun to read and while I was excited to finally read the last one, I was also so sad that this would be the last.

Sam has grown so much as a main character – I can hardly believe that the fresh-faced boy from book 1 became the seasoned Displacer that he is now.

It was such a strong transition but it developed so naturally that I hardly noticed until I took a step back to write the review for the very last one.

The plot version was fast, exciting and very engaging.

I definitely had no idea what was going to happen next but I was wholly (and completely) riveted.

All in all, this was a fabulous series and I’m so happy to have read it.

Interested in this one from Simon Brading? Buy it here:  Amazon