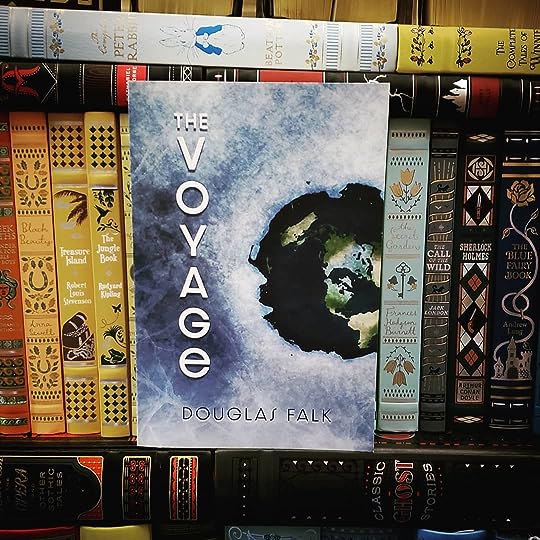 Dear God. It’s not a mirage. It looks like…looks like…could it be? Sweet mother of God.

How was John Wilander supposed to know that one shared beer could lead to a chase (wild goose chase?) after the world’s most closely guarded secrets?

William Milton is one of those people – yes. That’s right. He’s a Flat-Earther.

William has devoted his entire life to uncovering the truth behind Flat-Earth Theory, and at first John is easily able to laugh off William’s “evidence”.

But as the night wears on and things pile up…John begins to find himself wondering.

We are not meant to live here. Human life is not suited for this place.

Bound by a newfound friendship and a surprisingly high dedication for discovering the “truth”, John and William are about to set off around the globe…or…to the very edge of the world.

“We are walking, and we don’t stop unless the Grim Reaper himself shows up and cuts us down.”

This one was surprisingly fun.

I wasn’t sure how I was going to like it at first – especially considering…well..how ridiculous the whole Flat-Earth Theory is…(and the fact that every time they raise money to “prove” the earth is flat…they just end up proving its curvature).

But as soon as I picked this one up, I was completely and utterly on-board with it.

I loved that the author took the idea of “well, what if they’re right” and ran with it. The world he crafted was so well fleshed out and truly made for an enjoyable read.

John was a fabulous main character and I appreciated his logic and cool-headed-ness throughout.

William was the fun one of the group – with his crazy-ideas-that-just-might-work and his never-say-die attitude.

I do feel that the beginning was a bit slow.

There was a lot conversations regarding the nuances of Flat-Earth Theory and while there were definitely aspects of it that I found interesting but personally, I didn’t need all that.

After all, I regularly read mermaid books, faerie books and other mythical aspects and when I get hit with the impossible, I just kind of go – “got it” and roll with the book.

I think it would’ve been sufficient to just tell the audience that Flat-Earth is a viable theory and then place the evidence in a more scattered fashion rather than concentrated in the beginning.

Once you get to that third-to-half-way mark, this book really picks up momentum. I was absolutely dying to find out if they were right and what exactly was beyond Antarctica.

All in all, I found this book to be fun and exciting.

And I will never forgive the author for ending on such a cliffhanger. Dibs on being the reviewer for book 2!

P.s. Here’s my fave quote of the entire book:

“What’s the mantra?”
“Once you go flat, you never globe back.”

Ended up being quite good!

A huge thank you to Douglas Falk for sending me a free copy in exchange for an honest review.

Interested in this one from Carole P Roman? Buy it here:  Douglas Falk