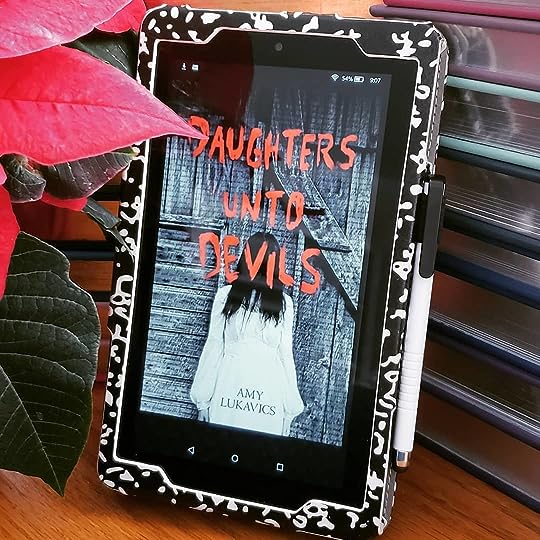 I’m starting to believe that hell is everywhere.

Amanda Verner, sixteen, lives with her parents and siblings in a remote mountainside cabin.

The last winter was absolutely terrible.

Things are just starting to get marginally back to normal, when her dad began shaking things up.

Amanda tried to be good – studying the bible and saying prayers….until a boy starts visiting her father.

A few months later and Amanda is now expecting…and absolutely terrified of what her father would do to her once he finds out.

But then they move, leaving the reluctant father-to-be behind and Amanda carrying her secret with her.

The Verners find an abandoned cottage on their new land and despite it being covered in blood, they decide to move in.

Whispers are abound – that the land itself is tainted by the devil…but surely, that cannot be true.

Once Amanda begins hearing the whispers in her head, she begins to wonder – what if she isn’t the crazy one?

You are stronger than you think you are. You are not your thoughts. The only devil inside of you is the one you created yourself.

I was surprised by this one.

Judging from the cover, I was expecting some really…weird and inconsistent writing…like a bad horror movie.

It ended up be rather intriguing – the whole mystery whether she’s crazy or if the world really is going mad.

However, it bugged me that nothing was truly explained. Things happened, and then more things happened. I really wanted to know who was the cause of it and why it was happening.

There could’ve been so much more to round this story out!

Interested in this one from Amy Lukavics? Buy it here:  Amazon

One thought on “Daughters Unto Devils – Amy Lukavics”