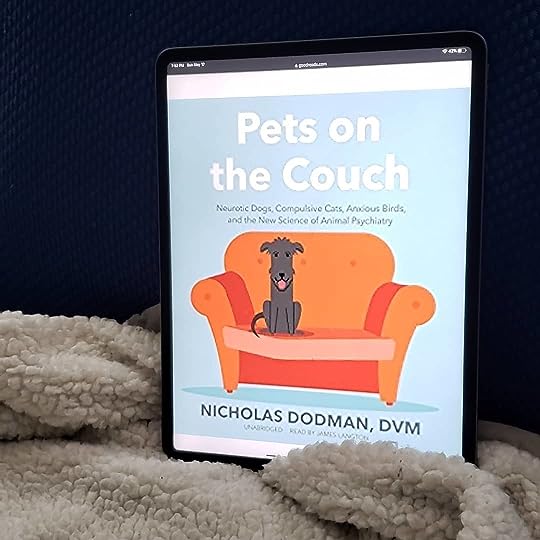 Can we treat animal behavior with the same medicines, therapies, and approaches we use on humans? To me, the answer is an obvious yes.

Veterinarian Nicholas Dodman has spent years diagnosing and treating dogs…as if they were human.

This book recounts his toils and troubles as he takes care of our four-footed family members.

Early on, Dodman experienced quite a bit of backlash as he proposed that animals could get depression, anxiety or even tourettes, but he was always quick to point out:

You could effectively teach medical students brain anatomy using the brains of dogs.

There are so many anatomical correlations between animals and humans that he believes that it’s ridiculous to completely dismiss that animals can (and do) suffer from mental ailments.

Dodman does point out that it will be difficult (if impossible) to 110% prove whether animals can get the same mental disorders as humans, but if the treated animals are healthier and happier than they were before, then that’s all we can ask for.

This book was really interesting – I loved the core message that our furry friends are more like us than we originally thought.

If there are enough correlations to a human disorder and the animal’s symptoms go away when treated with medication used for the human disorder, that it is likely they do have it.

I really loved how the author treated the dogs almost as if they were nonverbal humans.

It always bothers me so much when animals are put down rather than worked with – and yes, I can see the argument that there are some animals that just can’t be treated – but I’m of the mind that if you adopt, you need to be prepared for all the possibilities.

Reading this book really reminded me of when we adopted my first dog.

My dog, Squamish, was a wonderful little fella to me when we first adopted him a year ago but ohhhh baby, did he act out. It took work and dedication and three obedience classes to turn him into the lovely little citizen he is now.

Luckily we didn’t need to medicate him, but we often found that we were treating his phobias as if they were human-phobias, and used exposure therapy to turn him around. Which was reinforced as I read this book.

Overall, this book was quite catchy and I enjoyed it.

Interested in this one from Arnold Lobel? Buy it here:  Amazon